Imphal: The Khwairamband Bazaar, Imphal, Manipur is a marketplace with peculiar smell, sweat, cacophony and busy movements of shoppers and as well the shopkeepers. There is hardly anyone who does not require visiting the market. Khwairamnand bazaar or the popular name Ima market or Nupi Keithel is the world’s only all-women marketplace and one of Imphal’s main tourist attractions. This is because the most important feature of the market is that 4000 odd shopkeepers are women representing the greater mobility and economic participation of Manipuri women. What is not sold in the Ima Market? One can easily find items ranging from food items such as fresh fruits and vegetables, meat, fish and dried fish to local herbs to clothes and woolens, and traditional costumes. Metal and bamboo items are also found in the shops. The market consists of two main sections -one where the vegetables, fruits and necessary items are sold and the other where the handloom product of the state is sold. Ima market displays local culture, tradition and biodiversity. Products sold here are mostly local products.

Origin of the market:

There is no clear indication of the beginning of the market. The earliest indication of barter system in Manipur can be traced during the reign of Meidingu Thangwai Ningthouba in 1805. Many markets were established during 1592-1652 in different places for business transaction. Researchers indicated that the Gazetteer of Manipur 1786 indicates that all the marketing of the country was conducted by women in open air and markets were mostly held in morning time. In between 1948-52, a proposal came from some local rich persons in connivance with the petty alien trades to demolish the existing shed. But women were not outnumbered and were successful in retaining it. Centre for Organisation Research & Education (CORE), Manipur, India in a report published in 2005 pointed out that ‘these Keithel as not just hubs of commerce, but also of information exchange and socio-political processes’. During lunch or break times women discuss socio political issues and this flow of information keep them aware and empowered. It won’t be wrong to say that the Nupi Lan or women’s upraising against the British in 1904 and 1939 were organized and conceived from the market places. Thus women shopkeepers here are not simply business women but are leading examples of leadership and revolutionist. Women vendors busy with their customers

The 3 (three) Markets in Khwairamband Bazar, namely Ima Market, Laxmi Bazar and Linthoinganbi Bazar constructed by the Imphal Municipal Council will replace the traditional sheds of the Ima market. This development is not beyond controversy. Starting from nomenclature of the three complexes, allotment of shops, feeling of discrimination etc will haunt the celebration for many women. Several indegenous bodies have objected the nomenclature of the three complexes terming it non representative of the culture and history of the land. Shops are allotted to ‘licensed’ vendors while some women said that an average of 300 single women and widows, mostly the widows whose husbands are killed in fake encounters join the market to earn their livelihood. Most of these women have no license. In such a situation there is risk that these women will lose their livelihood. Several bodies have demanded special allotment or reservation for their community women. Kabui community has demanded 200 shops while muslim community has demanded 9% allotments in the new complexes. Part of the newly constructed building

Popular posts from this blog

On Citizenship Rights in Assam

https://www.institutesi.org/resources/monthly-bulletin-march-2021   When and why did you become interested in citizenship rights issues? Illegal immigration has been a perennial socio-political issue in Assam. It resulted in a spectrum of policies and practices in legislations, executive policies, judicial orders for detection and deportation of illegal immigrants since partition in 1947.  These actions enacted from time to time are reminiscent of the colonial legal process based on the colonial understanding of ‘alien’. The process bears reflection of dominant racial and cultural norms together with the claims of civilizational superiority of the ‘Assamese’. Any non-conforming community to this criteria is regarded as ‘outsider’, an ‘Other’ [Bohiragoto in Assamese] and is subjected to persecution, censorship, social stigma, prolonged incarceration and virtual statelessness.   In 2008, I was researching for a project on Understanding Impunity in India, when I started d
Read more
May 11, 2020 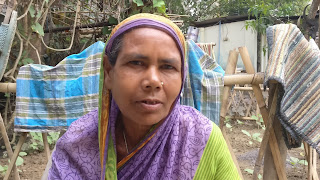 Dulema’s dilemma amidst lockdown Today [27 April, 2020] I was approached by a female farmer named Dulena Khatun, 45 years, wife of Soriful Miah, Nayapara, Mahendraganj. She looked distressed and weak. Its been more than a month that she is not able to go to her land where she was growing vegetables and was looking forward to earn a handsome amount. Her husband is deeply worried for survival in future. ‘I am facing immense hardship and loss for not being able to pluck my vegetables in my land bordering Bangladesh’, she said. India and Bangladesh share a 4,096 km-long international border, the fifth-longest land border in the world . The state of Meghalaya shares 443 km of this long border and out of this 329 km border is fenced with iron wire and concrete. Fences are built anti-climb and has three layers of wire making it extremely difficult for people to break or cross over. Fencing of border was initiated in the 1980s. Over the years, borders are highly securitised and mili
Read more